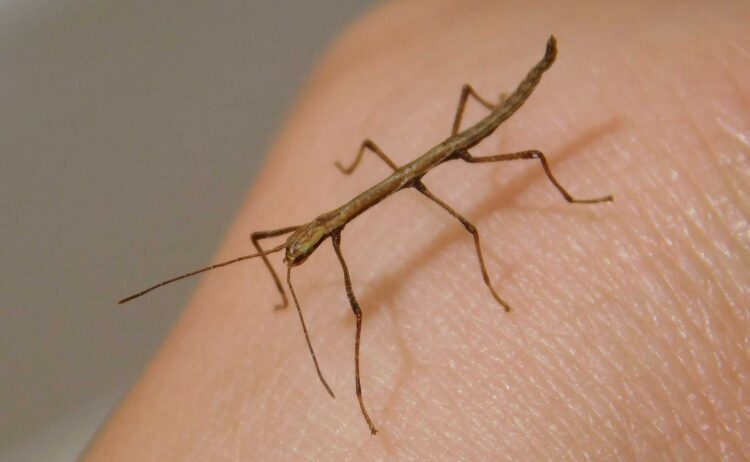 Your stick insects are obviously going to die eventually, whether we like to think about it or not. However, there is nothing more demoralising to a stick insect owner than seeing that some stick insect nymphs have died, then pondering the question ‘why are my baby stick insects dying?’ There is a lot of confusion among owners, especially novices, regarding this as they just do not know exactly where they have gone wrong.

So we are going to take a look at some of the reasons your nymphs might be dying prematurely.

When people wonder why their baby stick insects are dying, the answer may be due to the simple reason that you haven’t looked after the leaves placed in the enclosure as food correctly.

You already know that it is necessary to keep the leaves moist and hydrated at all times. But by simply putting the stems in a small container of water could be leaving your nymphs in danger.

A grown stick insect is not going to fall off a leaf and immediately drown in the water below. Nymphs, though, can drown in seconds as they are unable to climb out.

If you regularly see drowned nymphs in your enclosure, you need to cover the water container with a mosquito netting or some other similar material. They will not be able to fall through the gaps and your leaves will still get the water required to stay fresh and moist.

Stick insects are incredibly sensitive to being handled. If handled without due care, they could, for example, easily lose a leg. One of the biggest mistakes novice stick insect owners make is trying to handle the nymphs.

Warning: Nymphs cannot be picked up by their thorax as a grown stick insect can. The advice here should simply be to avoid handling your stick insect nymphs unless absolutely necessary.

You could try to coax them onto your hand, but even this should only be done if you have a lot of experience with handling colonies.

Many novice stick insect owners think that their stick insects have died when they haven’t found a body. The reason is that some nymphs are so small that it may not be dead at all. It might simply be hiding somewhere and you haven’t noticed it.

For example, the Timema cristinae native to North America grows to only a half-inch as an adult. As a nymph it is not even half the size, so it is easy to lose track of them, particularly if you have a large colony.

Advice: Unless you actually find the body of the stick insect nymph, do not just assume it has died.

Conditions Are Not Right

Take the Phobaeticus kirbyi of Borneo as an example. It is the second largest stick insect species in the world today, but it comes from a tropical environment. It does not automatically adapt to the conditions it is placed in.

One research paper on how temperature influences insect development discusses how stick insects are more susceptible to changes in the environment than most other animals. For example, a warmer temperature will cause stick insects to grow faster, which will consequently shorten their lifespans.

So are the conditions you have provided for your nymphs suitable for their growth and development?

Has Disease Spread Through the Colony?

This is important, and you really need to be careful about it. Fungal infections are the most significant threat to any stick insect.

With an older stick insect, you can tell if has have been infected. The fungus will normally form on the outside of their body. Nymphs, however, are too small for you to notice this. In addition, they typically do not last long after becoming infected as they are too young to even minimally fight the disease.

Scrutinise your cage to see if there are any signs of disease. If there are, you need to think about separating the healthy stick insects from the affected ones. This will stop the fungus from spreading further. But how do you go about making sure that fungus does not spread in the first place? There are two primary reasons for spread: dirt and overcrowding.

Tip: Do not be afraid to split your colony of insects to keep the numbers down. This is especially true if you are trying to breed your stick insects.

Second, make sure that you are cleaning the enclosure regularly. Remove dead plant matter and clean the cage completely every so often. As a side note, if your stick insects have missing legs or damage to the body, this will increase the likelihood of infection. And in most cases, this is due to improper handling.

Do You Supply Your Colony with the Right Leaves?

Stick insects are fussy about the leaves they eat. They will not touch anything that has brown spots and the majority of leaves placed into the cage will only be suitable as a food source for a day, two at most.

In addition, you need to be aware of the threat of insecticides. Leaves harvested from an unknown source could have been sprayed with insecticide, which is almost guaranteed to harm your baby stick insects. You should avoid buying any plants from garden centres for this reason.

Finally, if you are harvesting leaves from beside a busy road, they may have become contaminated with exhaust fumes. These are just as bad as insecticides.

So experiment with different leaves and where you source them from to see if it makes a difference.

The chances are your baby stick insects are dying because they are in an incorrect environment or are at risk of falling into a water source and drowning.

Research your species and find out what the right conditions are for them. Making some basic changes like the ones mentioned in this article can make all the difference to the mortality rate of your colony.