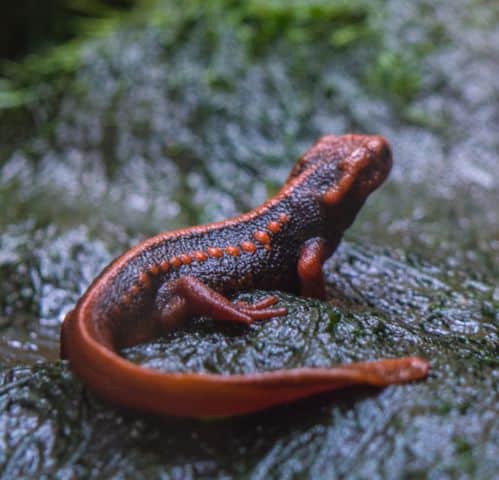 Newts are a part of the salamander family and depending on the species are either fully aquatic or semi-aquatic creatures. In the wild they are mainly found in the Northern Hemisphere, but they make fascinating pets regardless. Those new to newt husbandry might not know much about them or how they develop from egg to adult. Then there are those curious to know things like whether or not these little amphibians shed their skin or, if like some other creatures, can regrow lost limbs.

Adult newts tend to breed in mid-summer in the Northern Hemisphere, with the main breeding months being June and July. The male attracts the female by growing a large crest on his back, which merges with his tail (done to ensure the female notices him). To make sure he stands out from the crowd, the male performs a flamboyant ritual whereby he will vibrate his tail in the water.

Once he has attracted the attentions of the female, he will deposit a sperm sac and then guide her over it until she has absorbed it into her cloaca (genital opening).

When the resulting eggs are laid depend very much on the species of newt. Some lay their eggs within a few days while others wait until the springtime to lay them. Regardless, each egg is laid individually, which will all be folded into the leaf of a water plant.

How Do Newts Develop?

How quickly the eggs hatch depends on the temperature of the water. Most newt eggs hatch within two to three weeks. The resulting newt larvae resemble fish or tadpoles, but on closer inspection their feathery external gills give them away as newts.

Do Newts Shed Their Skin?

As newts develop, they undergo a complete metamorphosis where they will shed their skin and start to develop legs. Their gills will also be absorbed and be replaced by lungs.

Like many other creatures, newts regularly undergo moulting where they shed their skins. Most will eat the skin after shedding it. Some species, such as the common newt, will shed its skin once a week while growing to adulthood.

Newts can regenerate various parts of their bodies including eyes, heart, spine, tail, jaw, and brain. Growing a new limb is something that can be achieved in just a few months. Moreover, this is something that they can do over and over, regardless of age. Nevertheless, studies have shown that repeated regrowth of body parts can sometimes lead to some abnormalities.