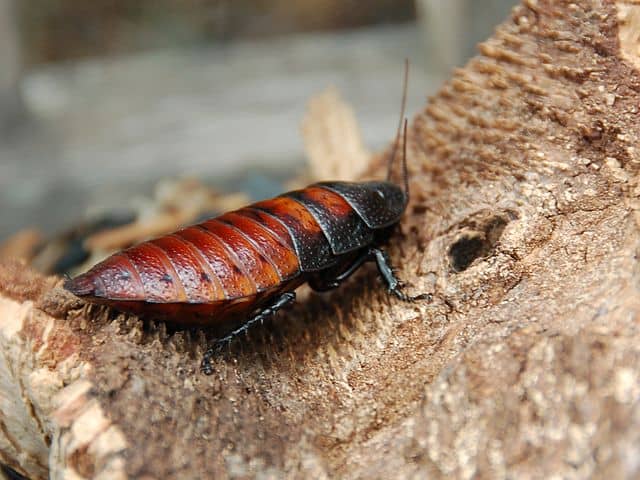 If you are considering a hissing cockroach as a pet, you should really try to find out as much as they can about these creatures beforehand, including how they mate and reproduce. You might be interested in breeding these insects; perhaps you are totally against it. You might want one or two hissing cockroaches of the same sex so as to mitigate any chances of being overrun by nymphs.

Regardless, the following paragraphs will hopefully give you at least some idea about how these fascinating insects reproduce, whether to tell if one is gravid, and what you can do to prevent them from breeding.

How to Breed Hissing Cockroaches

Hissing cockroaches are about a quarter-of-an-inch in length when they hatch, typically reaching maturity at around six months. However, they can reach sexual maturity after just three months. If you want to breed your Madagascar hissing cockroaches, you will need to make sure you have a male and female in the same enclosure. But to do this, you will obviously need to be able to tell the difference between the two sexes.

One of the most distinguishing characteristics of the hissing cockroach is its dorsal tubercles, or horns. These horns are present on the roach’s prothorax, the outer shell that protects the head. A male hissing cockroach will have horns that are much more pronounced than the female’s ones. You will also notice that the male’s antennae are slightly hairier and thicker than those of the females.

Another thing to look out for if you have a number of hissing cockroaches together is that the females tend to gather together with relatively no issues; male hissing cockroaches are extremely territorial and will chase off any other adult male that tries to invade its space.

Once you have a male and female hissing cockroach together, you will not really have to do much to get them to mate. When a male wants to mate, he will expel air through the spiracles (air openings) along his body, which makes a hissing sound. This will attract the female who will then approach, at which time the male will resort to rubbing the female’s antennae.

Once they begin their mating ritual, they will rub bodies before connecting backside to backside. They might become locked in this stance for up to half-an-hour. While female hissing cockroaches carry eggs inside them, they are actually ovoviviparous which means the eggs hatch inside the mother after which the nymphs will emerge. This makes it appear as if the female is bearing live young.

How to Tell if a Hissing Cockroach is Pregnant

Unlike with some other insects, it is quite easy to tell if a hissing cockroach is pregnant or gravid (carrying eggs) as you can see the ootheca (egg capsules) protruding from the end of her abdomen if you very gently press it. When you ease this pressure on the abdomen, the ootheca will disappear inside once more.

When the female is gravid, she will start to look bigger and she may even look as though her shell is beginning to split a little bit.

Female hissing cockroaches are pregnant for around sixty days, after which time the hatched young emerge from the female. As mentioned above, these nymphs hatch from eggs inside the female before emerging. The female will typically have around thirty nymphs at one time but can have up to sixty. As described earlier, the nymphs are usually around a quarter-of-an-inch in length when first emerging from the female.

Upon emergence, the nymphs are white, but as their exoskeletons start to harden a few hours later, they will turn a darker color. Hissing cockroach nymphs will molt (shed their skin) a number of times within the first six months before reaching full maturity.

How to Keep Madagascar Hissing Cockroaches from Breeding

The obvious answer to this is to keep the male and females away from each other. If you are adamant that you do not want cockroach nymphs, it is prudent to buy just one or two of the same sex. If you purchase your Madagascar hissing cockroaches from a breeder, he or she should be able to sex them to ensure you get two of the same sex. Remember though that male hissing cockroaches can become very territorial and aggressive, so it might be best to get two females instead.

If you are worried that you might have two hissing cockroaches of different sexes and you want to prevent them from breeding, it might be best to place a divider in the tank or separate them completely.